Last summer, most of us interns paid our first ever visit to the United States Consulate in Toronto when we were invited to a rooftop wine and cheese to mingle with the previous year’s interns as well as foreign representatives and American consular staff. It was a fantastic way to kick off our OLIP experience and gave us a great taste of what was to come! 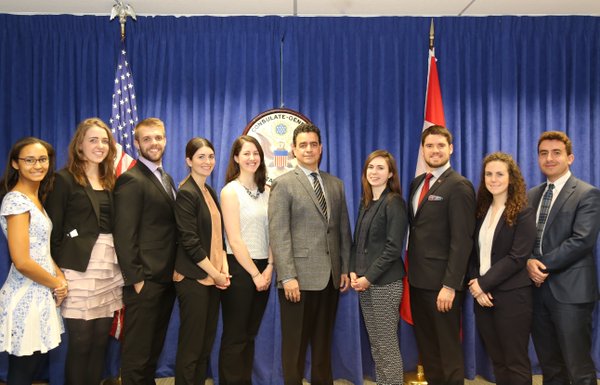 Last week, we were all lucky enough to be invited back to the US Consulate in order to meet with Consul General Juan Alsace, who assumed his current position in August 2015, just a few weeks after the rooftop wine and cheese. Although we had met Mr. Alsace early on in the fall when we were invited to a reception at his official residence, our meeting with him last week offered us our first real chance to sit down with him and discuss some issues of mutual interest and mutual importance to the US, Canada, and Ontario. A few of this year’s interns who hope to enter the Canadian foreign service also benefited from Mr. Alsace’s reflections on his 29 years of service.

We all greatly enjoyed hearing about his experiences abroad and engaging in discussion about the role of political parties and partisanship in American and Canadian political systems and political cultures. We were even given the chance to ask questions about the US presidential candidate nomination process and to share our views on Canada’s most recent federal election. Our upcoming trip to Ohio also figured prominently in our discussion with Mr. Alsace. We hope to chat with him again after we return from Columbus and look forward to sharing what learn about Ohio’s House of Representative, Senate, and legislative process!